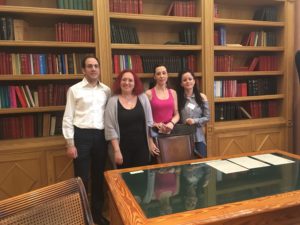 Pilot scale production and industrial application of synthetic aerogels based on novel chemistry form part of the core research in NanoHybrids, in addition to biopolymer aerogels as the second pillar.  Associate professor Patrina Paraskevopoulou (PhD) and her research team Maria Papastergiou (PhD), Despoina Chriti (PhD candidate) and Grigorios Raptopoulos (PhD) at the Inorganic Chemistry Laboratory at Department of Chemistry, National and Kapodistrian University of Athens focus their research on synthetic poly(urethane-acrylate) aerogels.

Polyurethane and polyacrylate aerogels are two types of materials with numerous and diverse applications. Polyurethane aerogels are produced from the reaction between polyols and poly-isocyanates. At the session “Functional Aerogels” on 24 September 2018 at the  4th International Seminar on Aerogels Patrina Paraskevopoulou will present their results on synthesis and characterization of synthetic polymer aerogels based on dendritic-type urethane-acrylate monomers.

Programme of the Fourth International Seminar on AEROGELS 2018

Patrina Paraskevopoulou, PhD, is an Assistant Professor of Inorganic Chemistry at the Department of Chemistry of the National and Kapodistrian University of Athens (NKUA). She earned her Ph.D. (2003) at NKUA on inorganic/organometallic chemistry and catalysis. Besides synthetic inorganic chemistry focusing on complexes with metal-metal bonds, her interests include radical and metathesis polymerization reactions, oxidation and atom-transfer reactions, electrochemistry, and she has published over 30 articles in chemistry.  She served as a co-PI of “Synthesis of Novel Advanced Materials by New Generation Catalysts via ROMP (Ring Opening Metathesis Polymerization) Reactions,” (600,000 €, 2012-2015).

The  Department of Chemistry has been established at NKUA in 1918 and is currently celebrating its centennial anniversary. They will host  “Athens Conference on Advances in Chemistry (acac2018)“, which will be held during October 30 to November 2, 2018, the first of a series of international conferences.