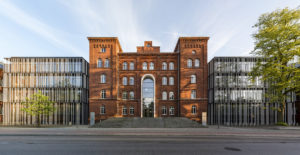 The lectures on the morning of the second day of the Fourth International Seminar on AEROGELS 2018 set their focus on aerogels for electrochemical applications. They start with a key note lecture of Marcus A. Worsley, PhD, who talks about nanomaterials-based electrodes for electrochemical energy storage and conversion.

Electrochemical energy storage (EES) devices, such as lithium-ion batteries and supercapacitors are emerging as primary power sources for global efforts to shift energy dependence from limited fossil fuels towards sustainable and renewable resources.

Marcus A. Worsley’s is working on graphene, a two-dimensional material that offers a unique combination of low density, exceptional mechanical properties, large surface area and excellent electrical conductivity. He does research on the fabrication of graphene aerogels via 3D-printing techniques. In this lecture he presents recent work in fabricating 3D functional electrodes utilizing 3D printing techniques such as projection microstereolithography and direct ink writing.

Marcus A. Worsley, PhD, is a chemist in the Advanced Materials Synthesis Group of Lawrence Livermore National Laboratory. Since the sixth grade, Marcus A. Worsley knew he wanted to be a chemical engineer. In a recent paper published online in Materials Horizons, a journal of the Royal Society of Chemistry, his team reported a breakthrough, producing micro-architectured 3D graphene aerogel structures with higher resolution and complexity than anything created before with other 3D printing methods. In September 2018 he has been nominated as part of a group of entrepreneurs, writers, executives, philanthropists and more on Diablo Magazine’s annual “40 Under 40” list, which recognizes young professionals in the East Bay who are leading the charge in their fields.

Programme of the Fourth International Seminar on AEROGELS 2018