Celebrating 100 years of Department of Chemistry with Athens Conference on Advances in Chemistry (acac2018): 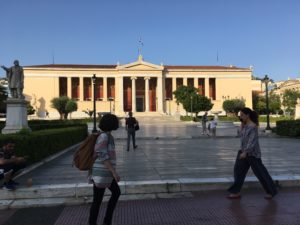 The Department of Chemistry at NKUA, one of NanoHybrids partners, is celebrating its centennial anniversary and has been established in 1918.

They have the pleasure of inviting you to attend the “Athens Conference on Advances in Chemistry (acac2018)“, which will be held during October 30 to November 2, 2018 in Athens, Greece. The conference venue will be the campus of the National and Kapodistrian University of Athens (NKUA).

This conference is the first of a series of International Conferences and is held on the occasion of the centennial anniversary of the Department of Chemistry at NKUA since its establishment in 1918.

This conference will be highly active and a forum for exchange of the latest knowledge concerning chemistry and related areas among researchers from all over the world. Chemistry has expanded into many multidisciplinary research areas involving large numbers of chemists, physicists, biologists and medicinal scientists. NKUA knows that many chemists, who have studied at their Department of Chemistry, are now in academic or research positions all over the world. It is thus their great pleasure to welcome all of them in Athens among many excellent researchers in all areas of chemistry. They anticipate fruitful discussions on the latest topics during several plenary, keynote, and invited lectures, contributed talks, and poster presentations. In addition, there will be an Early Career Researcher evening event for young researchers. The intention is to establish an inspiring atmosphere for exchanging innovative ideas and initiating new collaborations.

Athens, one of the world’s oldest cities with its recorded history spanning over 3,400 years and its earliest human presence starting somewhere between the 11th and 7th millennium BC, together with the NKUA, the oldest University in modern Greece, is the perfect place for this event to take place.

The  scientific and organizing committees are looking forward to welcoming you in Athens.