NanoHybrids achieved the production of bio-based aerogel beads in industrial scale for the first time. Two main methods have been developed, tested and employed. On one hand, well-known emulsion-gelation has been transferred into a continuous process especially suitable for small aerogel beads; on the other hand, the jetcutting method has been identified as a potential continuous production method for biopolymer-based aerogels with larger size. Production throughput of both methods can be upscaled to industrial scale.

The JetCutter, developed and produced by geniaLab GmbH, Brunswick, is a particle production technology for the synthesis of monodisperse beads. The production process is easy, clean and flexible. With minor changes a wide range of bead diameters from few 100 µm to several millimeters can be achieved. Bead generation frequencies can be as high as 9000 beads per second and nozzle. Depending on the final bead diameter throughputs up to 72 kg/h can be achieved. The JetCutter is a reliable technology for elegant scale-up from lab-scale to production-scale. 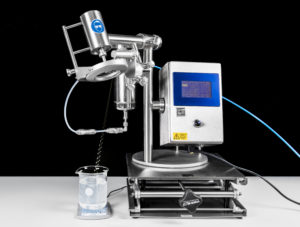 Production of alginate beads via the jet cutting method has been reported before; however, they were not converted into aerogels. In the course of NanoHybrids, several poly-saccharide-based aerogel beads have now been produced, e.g. with amidated pectin, sodium alginate, and chitosan as precursors. JetCutting followed by gelation, solvent exchange and supercritical drying with carbon dioxide resulted in the formation of spherical aerogel particles with narrow particle size distributions in the range of 400 to 1500 µm and a specific surface area of around 500 m2/g.

How the jet cutting method works:

Throughout the jet cutting method, a liquid jet of biopolymer solution is cut by a rotating cutting disc. Obtained liquid cylinders fall along their trajectory to the ground. Throughout falling, due to surface tension cylinders form spheres, liquid drops are collected at the end of the particle trajectory.

Polysaccharide aerogel beads with their physical, chemical and functional properties can be used in applications such as separation techniques, catalysis or as carriers for drug delivery. Often, spherical shape of the particles is desirable due to easier handling and application.

With the aim to reduce energy consumption, the biopolymer-based aerogel particles synthesized by NanoHybrids were tested as humidity absorbers in drying units for home appliances, particularly for dishwasher. It has been shown that for several cycles of absorption and desorption of humidity, aerogel particles are stable with an absorption capacity of around 20 wt. %.

Dive into the scientific results

Review on the production of polysaccharide aerogel particles

All NanoHybrids publications until 30 April 2019