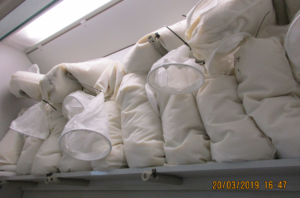 NanoHybrids started on 1st November 2015 to develop a new generation of nanoporous organic and hybrid aerogels for industrial applications. Main objective has been the upscaling from laboratory to pilot scale production.

After 42 months NanoHybrids reached its main goals: a number of novel bioabased, organic and hybrid aerogel particles can now be produced in pilot scale for the first time. The combination of experiments and modelling resulted in improved production processes with defined parameters.

Main achievements can be summarized as follows:

The knowledge has been made available for further research and development via a number of open access publications and reports. The project ended on 30 April 2019.