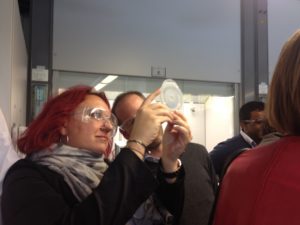 On 1 November 2017 Professor Patrina Paraskevopoulou started her Research Stay at the Institute of Thermal Separation Processes at TUHH in Hamburg, Germany. Her Research Stay is funded by DAAD (German Academic Exchange Service) and will last for three months until 31 January 2018.

Together with Professor Irina Smirnova and her research team Professor Paraskevopoulou will be working on the synthesis of cost-effective W-doped biopolymer aerogels, via environmentally-friendly processes, with potential applications to catalysis. This project comprises a synergistic effort at the interface of chemistry and engineering. It will combine the expertise of the applicant in the synthesis and applications of catalysts with the broad expertise of the host organization in the synthesis and processing of polysaccharide (e.g., alginate) aerogels.

Professor Paraskevopoulou is an Assistant Professor of Inorganic Chemistry at the Department of Chemistry of the National and Kapodistrian University of Athens (NKUA). She earned her Ph.D. (2003) at NKUA working with Professor K. Mertis on inorganic/organometallic chemistry and catalysis. She was a Post-Doctoral researcher at the Missouri University of Science&Technology, MO, USA (2006-2007). She has been awarded four scholarships by the Greek State Scholarship’s Foundation for academic excellence (1994-1997 and 1999-2000). Besides synthetic inorganic chemistry focusing on complexes with metal-metal bonds, her interests include radical and metathesis polymerization reactions, oxidation and atom-transfer reactions, electrochemistry, and she has published over 30 articles in chemistry. Her h-index is 10. Over the last 5 years, she has given 5 invited talks at national and international scientific conferences, and she has participated in two COST Actions and two Research Projects funded through the Greek National Strategic Reference Framework (2012-2015). She served as a co-PI of “Synthesis of Novel Advanced Materials by New Generation Catalysts via ROMP (Ring Opening Metathesis Polymerization) Reactions,” (600,000 €, 2012-2015).